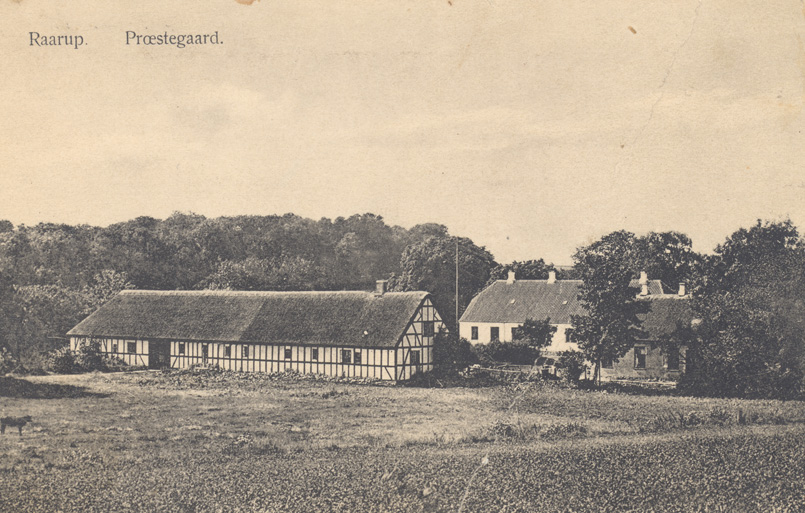 For the early immigrants the decision to emigrate was not easy. They would be leaving home for an uncertain future, many people died on the journey or from dangers or disease in the new land, and it was by no means certain that they would ever see family and friends again. It was a life-altering decision.

Economic problems were by far the greatest reason why most Danes left for foreign shores. In the mid-1800s the Danish population increased rapidly. This meant there were not enough jobs, and unemployment increased.

While families were often large, only one child could take over the family farm, so more and more children growing up in rural areas had little hope of owning a farm. As a result, most Danish immigrants in the 19th century were young, single farmers’ sons between the ages of 15 and 29; they left to escape from slipping into the landless class and with the hope that they could acquire a farm, marry, and start a family in a land of economic opportunity.

In 1864 almost one-fourth of Danish territory was lost when Slesvig-Holsten fell to Germany. The northern half of Slesvig (Sønderjylland) was Danish, but the rest of Slesvig-Holsten was German. Under Prussian rule, German military service was required and Danish culture was repressed. This political persecution prompted many Slesvig Danes to flee.

Deciding where to go was another matter entirely.

As time went by, more and more Danes learned about the United States, “the land of opportunity.” In the mid-1800s, many Danes living in the United States began writing letters home describing their new lives and new land. The letters often were printed in local Danish newspapers, causing a stir of excitement. Between 1820 and 1850 the number of Danes entering the US averaged only about 60 a year, but after the American Civil War their numbers increased substantially. Between 1820 and 1990 more than 375,000 Danes came to the United States with hopes for a better future, freedom from oppression or simply excited by the prospect of opportunity and adventure. 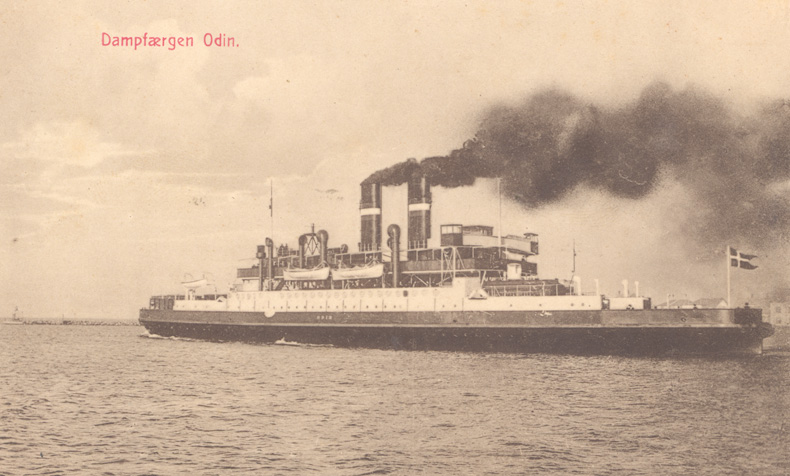 The earliest immigrants came on sailing ships. Crossing the Atlantic Ocean under sail took four to eight weeks. Tickets were very expensive. During the voyage, a few who could afford to do so traveled in first- or second-class cabins, but poor emigrants were crowded into “steerage” – cramped, unsanitary, stinking, vermin-infested, barracks-like accommodations below deck. They had no fresh food. Disease was rampant, and there were frequent burials of those who died at sea. After steamship travel became common in the 1860s, the Atlantic crossing was shortened to ten days and accommodations were somewhat more comfortable. Still, in the 1880s a steamship ticket would have cost almost a year’s wages for a Danish farmhand. 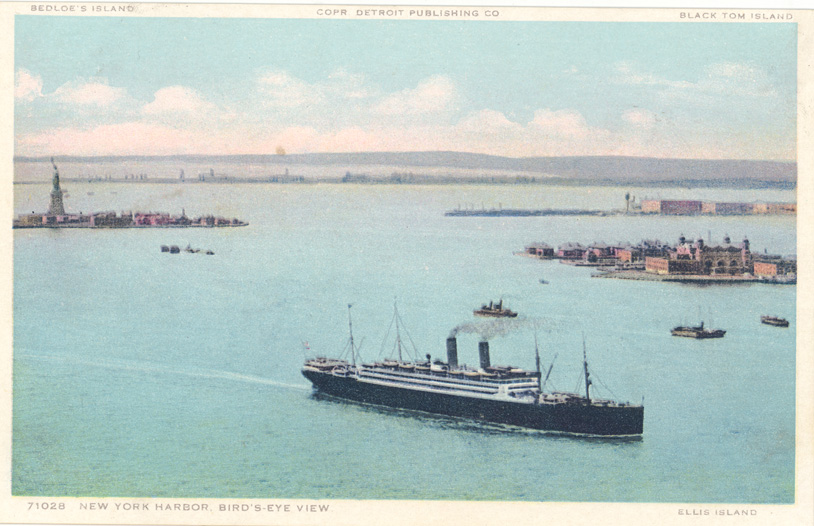 Photo: Postcard of New York harbor, showing the Statue of Liberty on the left and Ellis Island on the right.
2004.025.011 – Gift of William P. Jones.

In the late 1800s, millions of European immigrants sailed into New York, the principal East Coast port, where more than 30,000 were processed through an immigrant station each week. Upon arrival, they were given quick, sometimes painful medical inspections and asked numerous questions. Some did not pass inspection and were sent back on the next ship. 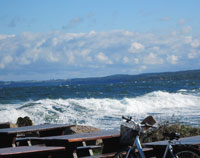 In the early 1800s most Danish immigrants settled in Eastern cities. Later immigrants traveled by boat or “immigration trains” to the Midwest. From the 1860s to1880s, Danish immigrants bound for Utah often traveled on foot from Illinois or Iowa, pushing their goods in handcarts ahead of them.

Most nineteenth-century immigrants packed their possessions into large wooden trunks that had to accommodate clothing, cooking utensils, and any tools needed to make a living in the United States. There was little room left for items of sentimental value. 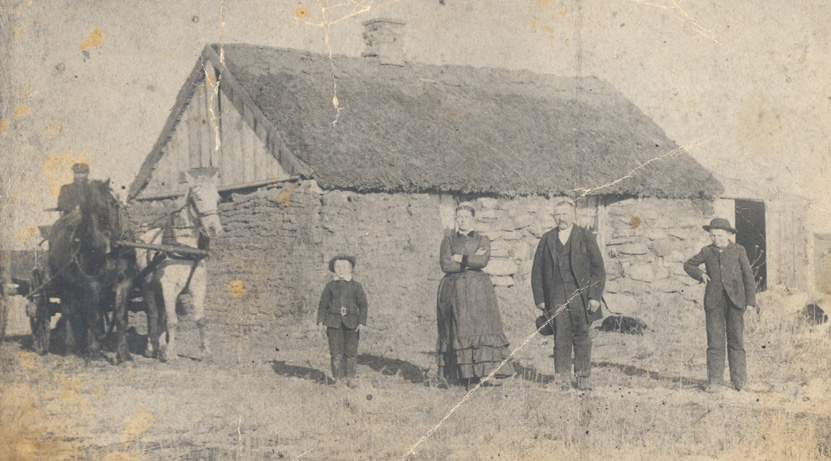 In the United States any immigrant who had filed an intent to become a citizen could claim 160 acres of unoccupied government land, homestead it, and earn title in five years in accordance with the Homestead Act of 1862. Or an immigrant could work as a farmhand (earning twice what he would have earned in Denmark) and buy a farm within ten years.

By 1870, Baptist pathfinders and other Danes had reached Shelby County in western Iowa. Utah drew many Danish Mormons in the 1850s to 1880s, but in the 1870s and 1880s the largest number of Danish immigrants still went to Wisconsin. In the 1890s and the first decade of the twentieth century, Iowa attracted the most, although many also settled in Nebraska and the Dakotas. Others went all the way to the west coast. By 1920, California had the largest number of Danish Americans, a distinction it retains to this day.

Between 1886 and 1934, Danish Lutheran followers of the theologian and cultural leader, Bishop N. F. S. Grundtvig, sought to preserve their ethnicity by founding rural Danish 'colonies' such as Tyler and Askov, Minnesota; Dannebrog and Nysted, Nebraska; Danevang, Texas; Dagmar, Montana; and Solvang, California.

Most Danish immigrants came from farm backgrounds. In the 1880s they settled the Midwest in large numbers, drawn there because the prairies and the plains had great agricultural potential and the government and railroads offered large tracts of land for sale. Once settled, Danish immigrant farmers generally raised cattle, hogs, and some sheep, with supplemental poultry and crops.

However, Denmark is also a seafaring country, and many Danish settlers served as officers and crewmen on American vessels along both coasts. Others settled in port cities like Brooklyn, Philadelphia, New Orleans, Milwaukee, and San Francisco as shipping agents, shipbuilders, and suppliers.

Danes assimilated quickly, aided by the fact that they were white, northern European, and Protestant. Furthermore, Danes are practical and believed that assimilating into American society promised greater rewards than hanging onto their Danish identity and traditional ways. To achieve this goal, they sought American citizenship, filing the necessary papers and studying for the citizenship tests.

Even though some Danish immigrants had left Denmark or Slesvig-Holsten to avoid army service, Danish Americans, like many other immigrants to this day, joined the armed services to fight for their new home even when they were not yet citizens.

Once in the United States, most Danes quickly learned English because they settled in areas with few fellow Danes. English is an easy language for Danes to learn since the are closely related Germanic languages, many of the vowel sounds are similar, and many Danish loan-words found their way into English around the time of the Viking invasions of England.

Only in heavily Danish communities did immigrants continue to use the Danish language almost entirely until World War I. During the wartime period, however, it was considered unpatriotic to use a language other than “American,” and all across the country the use of Danish and other foreign languages declined.

Within strongly Danish immigrant towns or neighborhoods, community-based committees would work to meet the special needs of children or old people. They built and operated orphanages and old people’s homes. For more information see our Church Basements and Children's Homes Exhibit.

During the Second World War Denmark was occupied by the Germans. While the government maintained control, the Danish Jews -- some 8,000 individuals -- were treated fairly and left more or less alone. However, in 1943 the Germans instituted harsher measures against the Jews and many were forced to flee. They went first across the water to Sweden, barely a stone's throw from Copenhagen, and from there many took the longer voyage to America hoping for a freedom and safety.

The next big wave of immigration started in the 1950s; some 25,000 Danes came to the US, but these immigrants were different. No longer were they impoverished farmers looking for land, but rather engineers and doctors. With more people receiving a higher education, there were fewer jobs available in those fields in Denmark and the immigrants hoped for better opportunities in America. However, the US had instituted quotas on all immigrants in 1924 and many Danes were now forced to emigrate to Canada first, and then try to come to the United States.

Many Danes found their chance for a better life and had a profound influence on their adopted land. Even today many Danish immigrants and descendants make a difference in American culture and society. For a list of famous Danes click here.

According to the 2000 census 1,430,897 (.5% of total population) individuals in the United States reported having Danish ancestry.

Among the states with most Danish immigrants you will find:

Some Facts about Danes & Danish-Americans in Iowa :

Iowa, along with Utah, Idaho, South Dakota, and Nebraska, were the states reporting the largest numbers of residents with Danish ancestry in 2000.