One can find examples of foods, furniture, design and other expressions of Danish culture in the homes of many Danish immigrants and their descendants.

Food is generally at the top of the list of interest and discussion when exploring the unique attributes of any given culture. It is quite difficult to describe a typical Danish dish, because not only is Danish cuisine influenced by various ethnic groups, but also because within Denmark there are several traditional dishes representing each region of the country. For the common Dane though, whether or not one comes from Jylland or Sjælland, a typical lunch is often an assortment of open-faced sandwiches – smørrebrød. Further, for a typical Danish family the evening meal is often presented as frikadeller (meat balls), kyllingesteg (chicken roast), or flæskesteg (pork roast), and in most cases served with freshly boiled potatoes. Of course for dessert one may be lucky enough to have the famous æbleskiver especially if it is close to Christmas.

Technologies & Danish Companies have contributed to a good world wide reputation of Denmark and Danes through the development of numerous popular products, designs and technological advances. At a steady pace, famous Danish companies like Bang & Olufsen, known for their outstanding technology in home and audio entertainment; Vestas, which designs and produces windmills for renewable energy production; Oticon, a major company dedicated to state of the art designs and products in the hearing aid arena; LEGO, a first class developer of children’s toys; and last but certainly not least Maersk, who is one of the leading shipping companies in the world.

Several Danish researchers have been working with NASA and the European Space Agency (ESA) and are credited as having contributed designs for several satellites such as the Ørsted satellite, which successfully compiled research pertaining to the magnetic fields of the Earth.

Danish Designs are welcomed around the world because their simple, clean design blends well with many themes. Bang & Olufsen’s simple and innovative product designs dominate the most sought after televisions, CD-players, and other state of the art systems, thus representing a fine example of a Danish design coveted by all.

A famous furniture designer, Arne Jacobsen, most noted for his accomplished work in creating the egg (ægget) chair, known for its simple, soft curves and timeless, classic elegance.

Most Americans, who are somewhat familiar with Denmark, know that Royal Copenhagen stands for craftsmanship, skill, beauty, tradition and simplicity. Possibly the most famous and unique Danish porcelains are the Flora Danica and the Blue Fluted.

Danish Fashions Design is now compared with Parisian and Italian designs, while Copenhagen is viewed along side Milan and Paris as a major fashion metropolis. Danish designers among top international designers are, Munthe plus Simonsen, who have received international recognition for their exceptional results and international success. The designer duo’s fashion expression is partly responsible for the now famous clothing line, “Danish Style.” Danish designer, Isabell Kristensen designs stunning dresses for both celebrities and common people in need of a pretty dress.

Danish music brings to mind well-known hymn writer N.F.S. (Nicolaj Frederik Severin) Grundtvig (1783-1872). Besides being a lyricist, he was a pastor and founder of what in Denmark is known as højskole (Folk high school). Grundtvig especially known as a writer of religious hymns was a major influence in the Danish cultural circles as one of the most influential figures in the history of the Church in Denmark. He wrote some 1600 hymns and songs, and many of his religious and educational concepts continue to influence Danish society today. Another composer from this era was Niels Wilhelm Gade (1817-1890), a teacher, fabulous organist and intense violinist whom was perhaps the first Dane to win international fame as a composer because his chamber music possessed unique movements of Scandinavian sound including a mature String Quartet, two String Quintets, a String Sextet and String Octet, Fantasiestücke for clarinet, piano and three Violin Sonatas.

Then along came the Danish pop band Aqua in the 1990's striking it big with a wickedly sarcastic and humorous tribute to all things plastic, "Barbie Girl." This catchy single and incredibly cheesy video crept into the nation's consciousness, attracting the attention of toy manufacturer Mattel who slapped a lawsuit on the group, claiming the band had violated copyright laws by using the image and name of the famous Barbie doll in their song without permission. Aquamania resulted due to the extra media attention the group enjoyed because of the lawsuit. Ultimately the group was looked upon by some as being a bit corny, which did not worry the group. After all part of being Danish is about having a sense of humor. The reality is that when given proper credit, the majority will agree that the irresistibly infectious pop melodies Aqua put out was some of the catchiest music known to mankind.

Among other modern Danish pop groups we could mention Kim Larsen and Gasolin, a group from the 70s and 80s who are now the basis of a movie and musical and the insanely popular Nik and Jay who rap in Danish and are listened to by most of Denmark's teens.

Movies from Denmark often reward the makers with comments about the humor involved, such that conclusively speaking, "Danish films are recommended - they are funny!" It is important to realize that sometimes the jokes aren't quite fit for translation. The play of words in Denmark is very entertaining and sports a special sense of humor that is "typical" Danish, far more known as an almost sarcastic variation of irony. Recommended Danish films are "Den eneste ene," "Små Ulykker," "Italiensk for Begyndere (2000)," "Nattevagten" and many more. Take in any Dogma film ("Mifunes sidste sang").

Something in a remote detached Danish fishing community attracted Skagen artists in the late nineteenth century evoking the atmosphere of time through an assortment of colorful paint tubes, sketches, paintings, piles of canvases and books. When asking a Dane “Who do you think of when I say Danish Artists?” most Danes respond “the famous Skagen artists.” The most well-known Skagen artists are Anna and Michael Ancher, Krøyer, Drachmann, Tuxen and Locher. These painters are known for their usage of light and special motifs. To see the Skagen painters in Copenhagen one must go to the Hirschsprungske samling. For more information see www.hirschsprung.dk

Contemporary artist Asger Jorn is known for his oils, but also for a number of water colorings, drawings, written articles and art theory books. In 1965 his painting “In the Beginning” was sold for 15,644,000 kroners (approximately $255,494.00 U.S. dollars) at Christies Auction House in New York.

Bjorn Winblad, yet another well-known Danish Artist has several posters depicting unique designs of the characters at the Tivoli Garden in Copenhagen to his credit. 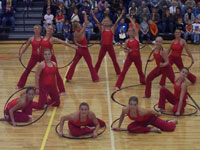 Soccer is a major interest for Danes along with handball and gymnastics, which is the oldest sport in Denmark. The National Team (Verdensholdet) travels all over the world astounding audiences with performances of dynamic expression. The Danish gymnastic association (DGI) Danske Gymnastik og Idrætsforeninger can be traced back to the mid 1800's.

Not a Member? Join Today!!