Go back in time at Bedstemor's House and step into the world of the early 20th century immigrants.

Bedstemor’s House was built in 1908 by 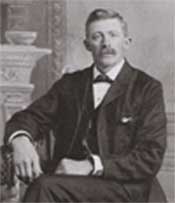 Jens Otto Christiansen, a Danish immigrant and Elk Horn businessman. According to local stories, he built the house as an engagement gift for a young woman who sadly turned down his marriage proposal. It is unknown if Christiansen ever lived in the home himself, but he rented the home to several families until he sold it to the Salem Old People’s Home in 1933 for “one dollar and other valuable contributions.”

In 1946, the house was sold to Meta Mortensen, also of Danish descent. She lived in the home for 36 years, making only a few notable changes. The roses that she planted along all four sides of the house still bloom.

In 1982, Meta sold the house to the Elk Horn-Kimballton Arts and Recreation Council. The Council spent a year restoring the home to reflect the turn of the century. They named it "Bedstemor's House", using the Danish word for "Grandmother", in honor of Meta Mortensen who was herself a Danish-American grandmother. The Council operated the house for seven years until it was deeded to the Museum in April of 1990. The building was added to the National Register of Historic Places on January 16, 1997.

The Museum continues to operate Bedstemor's House as an historic house museum, interpreting the home in its first decade. All rooms are open for viewing.

Bedstemor's House is open to the public between 1:00 pm and 4:00 pm from Memorial Day weekend through Labor Day, and by appointment throughout the remainder of the year.

The Story of Bedstemor's House

"The Story of Bedstemor's House" video is made possible by generous support from Marne Elk Horn Telephone Company and Humanities Iowa, the state-based affiliate of the National Endowment for the Humanities.