Just down the hill on the north end of the museum is the Jens Dixen House. This small North Dakota homesteader's cabin was originally located just north of the community of Kenmare, where Jens Dixen first moved when he arrived in the area around 1901. 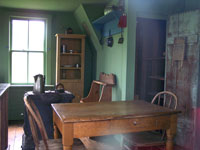 Dixen was a Danish immigrant, school teacher, and preacher. He taught area boys in this house, and primarily focused on spiritual training. During especially harsh North Dakota winters, the students slept in the small space above the one room on the main floor. Dixen's students became known as "shanty boys" because of where they were taught.

The Jens Dixen House was moved to the Museum grounds in 1999, and was restored by The Cedar Valley Danes. It has since been furnished as Dixen may have used it.

The House is open to the public during the same hours as the Museum.